When you start a new charater, the following image will be prompt, as usual in Ultima Online: 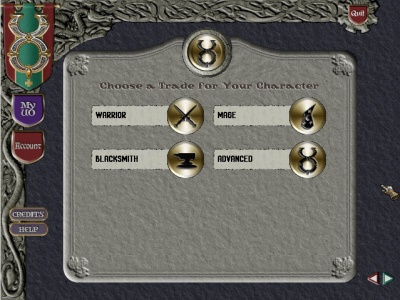 Please note that in Pangaea there is a custom class-system, therefore there is no need of the Ultima standards Warrior, Mage and Blacksmith. You must choose ADVANCED in order to procede. Then another gump will appear: 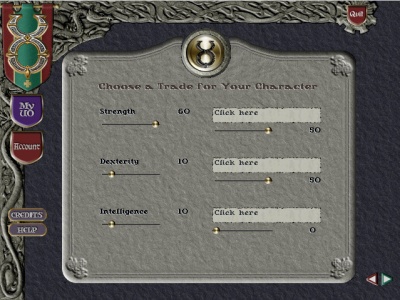 In this screen, the choosen skills and stats are irrelevant, so you shouldn't care about what you choose in this screen, however you must choose anything to procede. When you enter in the world, a custom gump will allow you to choose everything.

Some of the hardest skills to train are:

The most valuable skills to train are:

The hardest skills to train are:

The most valuable skills to train are:

The hardest skills to train are:

The most common way to earn some gold when starting out is to head to a field and harvest some crops. Carrots and cabbage not only provide food for you and your pets, but vendors buy them for a few coins and it builds up your strength as well.

Wheat can be harvested and turned into flour near a flour mill (there's one located near the baker in Britain).

And lastly, cotton and flax can be harvested, then turned into yarn and cloth in the tailor shop, and then cut into bandages which fighters are more than happy to buy from you on the sales boards. This is usually the most profitable method.

After you've gained some strength and equipment, a few more options become available:

Vendors are NPC merchants that you can interact with to sell and buy items. Some of them are also able to train you in certain skills in exchange for gold, but only up to 20 points.

When you die, you become a ghost, unable to physically interact with the world.

When you die you can be resurrected by the following means:

Plague, a fairly unique mechanic in regards to most other Ultima Online shards. This is considered a poison, though it could almost certainly be classified as a disease, but to keep it simple, it is thrown in the poison category. While the normal cure potions or spells do not cure it, it can be cured multiple ways, including but certainly not limited to the bard's Song of Cleansing and a Cleric's rite Purification.

Plague is unique in itself from the other poison types because unlike the basic poison types, those who are infected with Plague are able to spread it to other players and NPCs through close proximity of each other. It can be a very effective way of ravaging a city and crippling the city's defenses. It is important to note that if one plagues an NPC, they do not drop their natural loot, it will however drop any loot that it has looted. This is very good to note because should you find yourself with no other options in retrieving your belongings, there is still hope if you can find someone who can utilize Plague potions or spells.

Sometimes, you might find robbers around (Players that dedicate their life to crime). When in trouble, players can use the command ".mayday" and call the local authorities (Order of Law or Order of Imperial), so they can be warned and help you as fast as they can.

Check the Skill requirements for weapons list in order to check what weapon fits you the best.

Macroing, the art of looping a skill or ability over and over again in hopes to gain skill, monetary value or resources. On Pangaea, you are allowed to macro, you can use programs such as EasyUO or UOLoop.

Be warned however, while macroing is perfectly legal on Pangaea, Unattended macroing is not allowed. This is where the Macro Check comes in, it is a simple Gump that appears in game and asks you to input a two digit number that is shown in the gump. You have 5 minutes to answer with the correct answer before you are kicked offline and your name is added to the infamous "Unattended Macroing List". Do not fret if you fail a macro check or two, most veterans have failed at least one and most two, it is not the end of the world unless you are a habitual offender of this rule. If you find yourself having failed a macro check and your skill dropped, if you are very mad, the best advice would be to take a break from the game for a couple days to a week and let it blow over and pick up the pieces. It really is not anything to get steamed about, it happens to the best of the players on Pangaea, just do not make it a regular habit to breaking this rule.

Through the use of EasyUO and a Macro Check Alarm script, you are able to multitask a little easier while macroing, however, there are a couple points you ought to consider:

So your ready to join class? Do not be too hasty, there are tips and tricks you might consider before joining class, most veterans know them, but for those amongst us who are fairly new to Pangaea and the Class System that Pangaea offers, these are invaluable tips for the long life your character may have.

To begin with, just because you have the required two skills it takes to join your class, you might consider raising your desired classes' tertiary and penalty skills to their appropriate levels as they will raise faster in pre-classed. Once you have done this, you also might consider raising your secondaries to 65 as this means ultimately less time training while in class, while your secondary skills will not raise any faster pre-class than in class, it just means less training, indeed in most cases safer training.

However, once you have raised the skills to the levels you wish to get them to, head to your guild master and say join the class by using the word "join" either by itself or if you wish to properly adhere to a better RP atmosphere, which is something we should all strive for, use it in a sentence such as "I'd like to join your class."

Also upon joining your class, you are no longer protected by shard rules from robberies.